Law-enforcement family members always know to say, “I love you” to one another before they begin their shifts.

Officer Jesus Retana was patrolling during a demonstration last July when a bullet hit his tricep.

Retana was ambushed by a heavily armed sniper who gunned down police officers in downtown Dallas.

In 2012, Moss and Retana were behind an effort to get the department to add insurance benefits for same-sex partners.

Moss and Ratana’s efforts were a success.

In the face of a horrific rampage, Ratana and Moss are a reminder that all law enforcement families deserve equal protection. Especially when they need it.

In 2012, Officer Michael Napolitano began serving the Orlando Police Department. By 2015, he joined the force’s Special Weapons And Tactics team.

Napolitano's life was saved by his Kevlar helmet, which was pierced by a .223 round fired from an AR-15 rifle during the shootout.

His heroic service saved more than 100 lives in the deadliest act of violence against LGBTQ people in United States history.

Napolitano holds a BA in Anthropology from the University of Central Florida, where he was named the Lawrence J. Chastang Global Fellow and a Showcase of Undergraduate Research Excellence winner. Napolitano also made UCF’s dean’s and president’s lists.

During his career with Orlando PD, Napolitano participates in community outreach programs and assists with the training of new recruits.

Whether guarding our shining seas or keeping our streets safe, officer Brooke Bukowski achieves recognition and respect wherever she serves.

Raised near Chicago, Bukowski joined the Coast Guard at the age of 18, serving in Illinois, Michigan and Virginia.

The Empire State lured her - to aspire to be part of the NYPD, where she would eventually transition while serving at the 70th precinct.

She also works with criminal justice students at local colleges and focuses on improving relationships between the NYPD and the LGBT community.

The Proprietors of The Stonewall Inn

Kelly also brought in LGBTQ community activist and businesswoman Stacy Lentz as an investor and collaborator. The group quickly realized the value Lentz brought to the partnership and she soon became a co-owner. The four began working tirelessly on the desolate but esteemed Stonewall Inn to restore it to the landmark it always deserved to be.

Kurt Kelly has over thirty-five years experience in the New York City nightlife and bar business. When Kurt first took ownership of The Stonewall Inn he certainly was aware of its incredible legacy but had no idea it would one day become the first LBGTQ National Monument. The history of The Stonewall Inn was a responsibility he took very seriously and he was recently reminded just how important it was to the LBGTQ community today when it became the epicenter of celebration the day Marriage Equality came into law across the Untied States. Today, Kelly is responsible for the day to day operations of the iconic bar and he has used his background in the arts and creativity to keep the historic landmark constantly entertaining to the customers that come to visit from around the world. The Stonewall Inn and it’s continuing impact on the community moved Kelly to tears when it offered a Vigil for the Pulse shooting victims. Kelly said he had become accustomed to seeing people congregate at The Stonewall to celebrate victories in the LGBT movement, but seeing thousands gathering to mourn after the Pulse nightclub shooting was an incredible reminder that The Stonewall Inn is the mega church where the community gathers in both good and bad times and Kelly says he couldn't be more proud to keep that legacy alive.

Bill Morgan’s bar and restaurant experience in New York City spans over thirty years. Bill worked directly with the National Parks Conservation Association and the National Park Service to advance the Stonewall Monument designation and today Bill is the liaison for the Stonewall with all the various city departments as well as the building owners. He feels he is most proud of The Stonewall Inn's continuing work on behalf of and in conjunction with the various non-profit organizations. He hopes The Stonewall Inn will be an ongoing example of inclusion and equality as well as a business that continues to support worthwhile organizations outside of The Stonewall Inn in whatever form that may take. The Stonewall Inn's continued dedication to be a positive example of what can be accomplished while helping to lift others up along the way is something that Bill finds extremely gratifying.

Tony DeCicco has been in the nightlife industry in New York City for over twenty-five years including managing and owning several other clubs and restaurants in Greenwich Village. Tony recalls a poignant moment the morning that Marriage Equality had passed. He was standing in front of The Stonewall Inn, wearing his Levi's Stonewall t-shirt and a women with two grammar school-aged children asked him if she could take a picture of Tony with her children. She told him she isn't gay and she doesn't know if her children are gay but she felt it was important for them to experience something so historic. Tony hopes that The Stonewall Inn will grow to become not only the symbol of the gay rights movement but the symbol for all equal rights.

Stacy Lentz has been instrumental in organizing numerous community-service initiatives and fundraising charitable events with her partners at The Stonewall Inn. A range of LGBTQ organizations such as GLAAD, Marriage Equality USA, the Hetrick-Martin Institute, HRC, the Anti-Violence Project, Sylvia's Place, Lambda Legal, SAGE, and others have held benefits at the historic landmark. In addition to being a co-owner, Lentz is a well-known LGBTQ activist and is currently The Stonewall Inn's Spokesperson. Lentz has eloquently spoken on behalf of The Stonewall Inn and on important LBGTQ issues to multiple major media outlets including CNN, Fox News, MSNBC, ABC, CBS, NBC as well as a variety of other news organizations. Lentz has been honored for activism by The Stonewall Community Foundation, and received the Community Hero Award from the Antiviolence Project/HBO as well as been knighted by the Imperial Court of New York for her work in the LGBTQ community.

Serving and protecting others is a vocation. For Bronx native Aiden Budd, his calling was interrupted by “don’t ask, don’t tell” … but only for a while.

After studying criminal justice at Monroe College in New York, Budd enlisted in the United Stated Army as a military police officer — until he was expelled.

However, that controversial policy didn’t discourage Budd from pursuing his dreams of uniformed service.

In 2006, Budd joined the New York Police Department’s School Safety Division where he served as a training instructor.

Dedication and perseverance helped propel Budd to inform his colleagues that he would transition from female to male.

His sincerely hopes to break barriers and challenge stereotypes while improving community-police relationships.

After “don’t ask” was repealed, Budd re-enlisted in military service as an active reserve member. 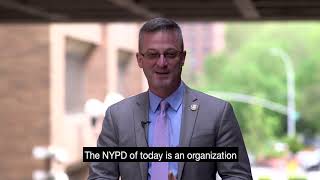 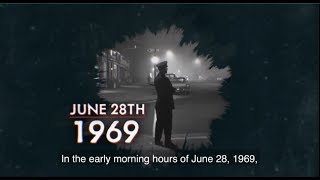 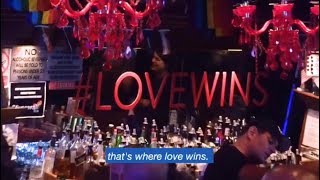 Viewing of "The Journey" at DOC NYC Fest 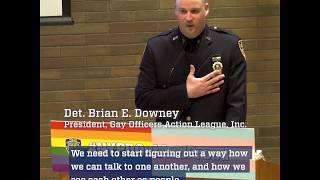 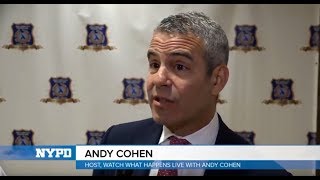 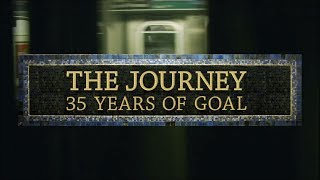 The Journey 35 Years of GOAL